Skip to content
The Dangers of Yeast: Beau’s Story

The Dangers of Yeast: Beau’s Story 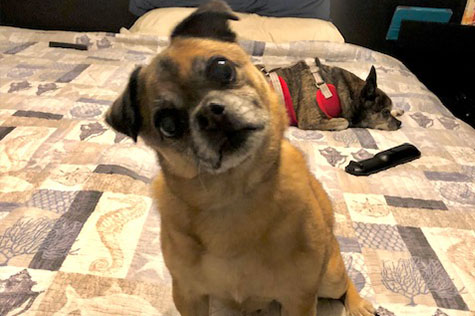 On November 23rd Beau’s mom was making homemade dinner rolls for Thanksgiving, her dog Beau jumped on the table and ate some raw dough while it was rising. At about 1:30 the next morning, she heard him howling and crying once he was let out of his create he was stumbling and fell over. His mom took him outside, and he was pacing and circling. He usually jumps on her bed without any trouble, and he couldn’t make it. She couldn’t figure out what was wrong, after recalling that he had eaten raw dough the night before, she did a little research and learned that raw bread dough consumption is toxic for dogs. His mom then rushed him to the Animal Emergency Clinic of St. Petersburg (AEC).

Beau arrived at the AEC at around 2:30 in the morning, where the attending doctor performed a full physical exam. She discussed the complications with bread dough ingestion, including ethanol toxicity and gastrointestinal issues that occasionally requires surgical removal. After taking x-rays of Beau, it was determined that his liver was mildly elongated, and his stomach contained gas, fluid, and opaque material. The radiographs showed that his small intestines were enlarged, containing segments of fluid and gas as well as the opaque material. The doctor concluded that the opaque material was likely to be the bread dough and that he did not require surgery and it will pass on its own. It was recommended to Beau’s mom that he be hospitalized at the Animal Emergency Clinic where the team could administer IV fluids, perform regular blood work and take additional radiographs to assess his electrolytes and organ function and monitor the passage of the material.

After being hospitalized for a day, Beau’s stomach felt softer, his balance improved and was sent home to continue his recovery. Beau’s discharge instructions were to keep him on a bland diet and slowly increasing the amount of food provided for the following few days. This is to ensure that nothing upsets his stomach and that he will be able to keep the food down. The doctor pointed out that if during these few days if Beau experiences any of the following symptoms that he was to be seen by a veterinarian right away:

Beau was lucky, having only consumed a small amount of dough he made a complete recovery.

How to Protect your Pet from Ethanol Toxicity:

Bread dough is not the only source for ethanol poisoning; it can come from a variety of sources such as:

While it can be easy to limit your pet’s access to the products mentioned above, it is essential for you to know what to look for should your pet ingest them. The symptoms of ethanol poisoning can vary based on what and how much was consumed, but the main thing to watch for is:

Like any poisoning time is critical in treatment, the sooner your pet can be seen, the higher their chances of surviving the exposure.

Note from the
Attending Doctor

“ A key factor to consider with regards to yeast or dough ingestion is that is it very size dependent. In some dogs it could even be a surgical emergency because the dough will continue to rise. Some of the frozen rolls rise VERY quickly and can result in damage to the stomach and even rupture if left long enough. In a majority of cases, the signs that we see are actually due to fermentation. You could correlate to making beer, because that is in essence what is happening. The dough is continuing to rise and the yeast ferment resulting in the production of alcohol. Hence the patient becomes drunk. These are the cases where size, amount, and type of dough are very important.”